The telegraph has paved the way for other forms of communication such as the telephone and now internet webcasts.  Webcast providers enable pictures, text, and speech all to be relayed in real time allowing for easier communication.

Prior to 1300
FIRE, SMOKE, BELLS, TRUMPETS, DRUMS AND GUNS

1300 to today
FLAGS AND SEMAPHORE

1809
First telegraph in Bavaria. Samuel Soemmering. Used 35 wires with gold electrodes in water. Detection at distant end 2000 feet away was by the amount of gas caused by electrolysis.

1840
Samuel F.B. Morse and Alfred Vail were issued a patent for the first practical telegraph based on electromagnets. Relays were used every 10 miles to repeat the signals. In Morse coding there are 11 different characters between American and European codes.

1845
Samuel Morse and Alfred Vail introduce a Morse printer that uses ink and electromagnets to print dots and dashes on paper tape. 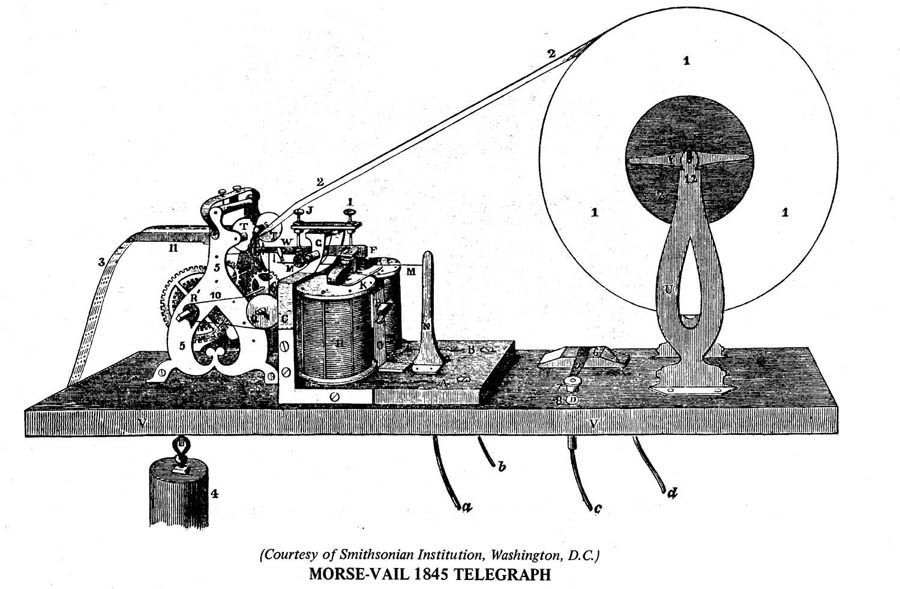 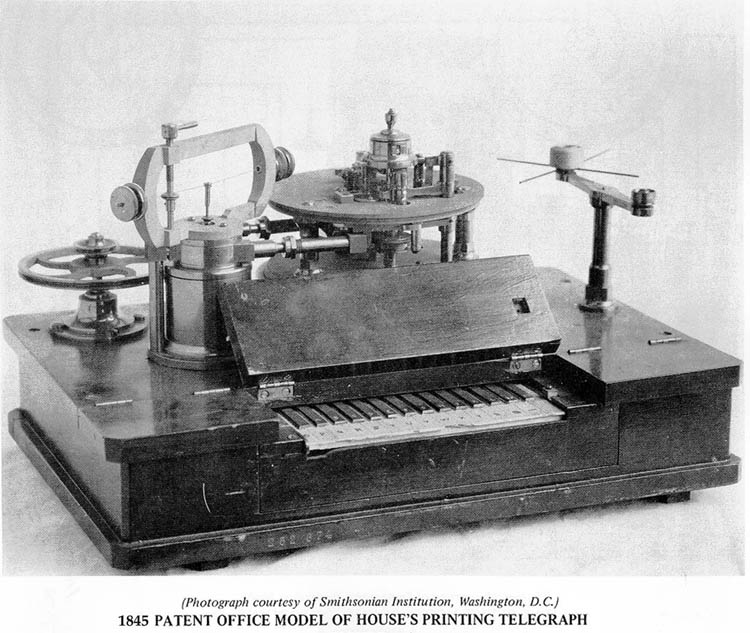 Royal E. House of Vermont produces a printing telegraph that uses paper tape, a type-wheel and a piano style keyboard. One key for each character.

1856
David Hughes, a music professor in Kentucky uses a vibrating spring tuned to a specific pitch to synchronize the sending and receiving teleprinter with use a code invented by him. 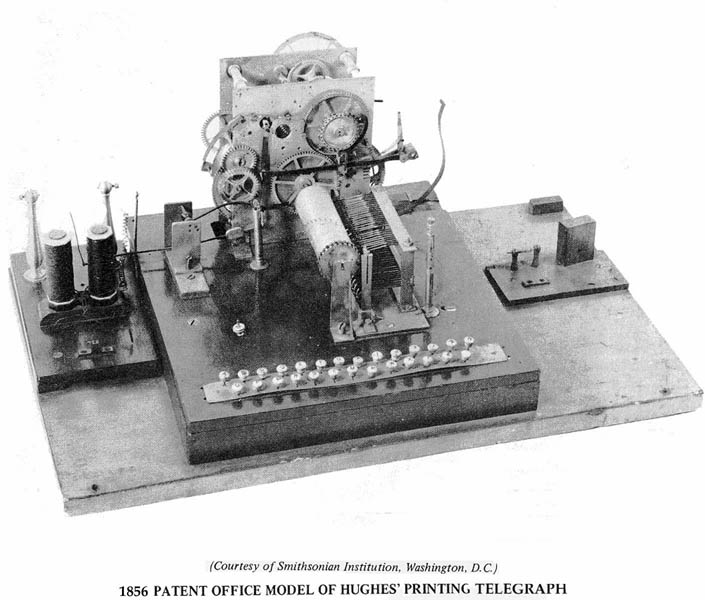 1865
Telegraph becomes the greatest means of communications ever. Over 83,000 miles of wire in the USA alone dedicated to telegraph. At the same time development of the telephone begins.

1874
J.M.E. Baudot in France invents the multiplex telegraph system where at least 4 stations can transmit simultaneously (actually serially) through the use of a distributor. The transmitters are like a miniature piano with five keys. Each combination of keys equals a character. Paper tape is used as the printed media. 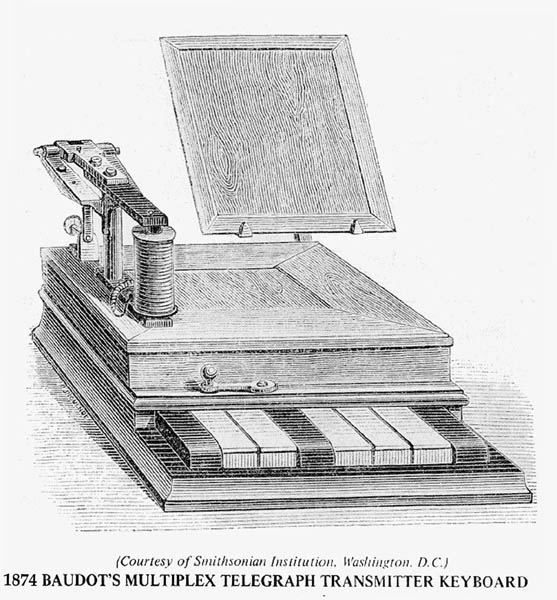 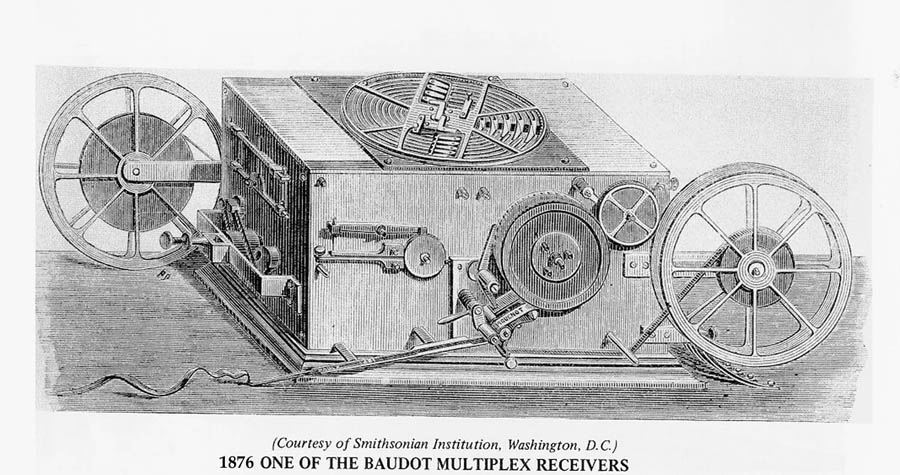 1901
Donald Murray improves the 5 unit code with new character assignments and adds two shifts. This becomes the basis of CCITT Alphabet No. 2 (ITA-2) which is still in use one hundred years later.

1902-1907
Charles Krum perfects the 5 unit ITA-2 code with a start-stop sequence to allow teletypewriters to be used in commercial applications. One coded character is 7.42 unit intervals.

1906
The Morkrum Company was established with its ownership shared by Charles Krum and the Morton family. 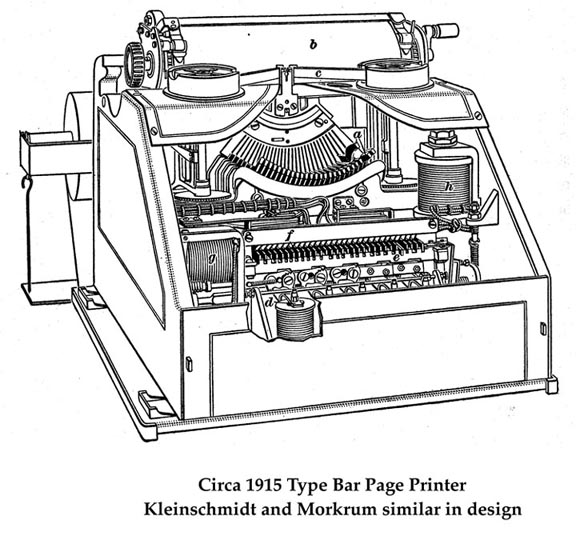 1918
Morkrum Company operation was expanded from its “garage” type facility. Employees numbered “over 200”.

1921
The M11 type-wheel tape printer, went into production. It constituted the first commercially acceptable and successful unit, The M11 was manufactured through 1927 with 883 machines being produced.

1922
The M12, a type-bar page printer with moving platen, was first marketed. Previous to 1922, printing telegraph was limited largely to commercial-telegraph and railroad uses. The M12 page printer opened the way to general business uses. Substantial numbers of this unit were sold through 1930, with quantity, too, being sold as late as 1943. A total of 11,899 M12 units were sold.

1925
The M14 type-bar tape printer was first marketed. The machine reached its highest production in 1929 and 1930. A total of 60,000 units had been sold when the device was manufacture discontinued in the late 1950s.

1929
The title Morkrum-Kleinschmidt was found to be too cumbersome and was dropped in favor of “Teletype.”

1930
The M15 type-bar page printer with stationary platen was introduced. This machine soon became the “bread and butter” unit of Teletype, reaching its peak output during WWII. Through 1954, about 200,000 were sold. A large percentage of Bell System Teletypewriter Exchange (TWX) stations were of the M15 vintage.

1932
TWX (Teletypewriter Exchange Service) was inaugurated by the Bell System. Terminal equipment provided by the Teletype Corporation was of the M15 type.

1941
The M14 tape punch was first marketed. Approximately 50,000 units were sold through the late 1950s when the device was manufacture discontinued. About 90% of all effort at Teletype was devoted to the war.

1951
The first M28 page printer was delivered to the Navy. This represented approximately 12 years of research and development effort. The M28 line was accepted by the Bell System as a successor to the M14, 15 and 19 lines of equipment in 1956. The M28 design principle constituted the corporations basic approach to both message and data recording equipment until 1960.

1953
The first “DataPhone” is developed by Bell Laboratories. About the size of a small desk it operates totally analog circuitry at the speed of 50 bps. Model 29 was scheduled to replace the Model 20, but it never happened. Model 31RO and KSR Tape Printer is invented for the miliary.

1960
Teletype Corporation assembles for the first time under one roof in their new quarters in Skokie, Illinois. A multi-million dollar plant with a million and a half square feet of operating area and employing over 6,000 workers, it represented a milestone in the history of the Teletype Corporation. Manual TWX stations are all converted to dial.

1961
The Model TT-242 is rejected by the Navy in favor of the MITE compact teletypewriter. It becomes the basis for the model 32 and 33. The M35 and M33 lines of equipment. While the M35 is merely an 8 level version of the M28, the M33 represented the marriage of many proven designs into a totally new design, best described by the term “low cost concept.” Approximately 6 years of research and development went into the Models 242, 32 and 33.

1968
The first and longest strike against the Bell System by members of the Communications Workers of America and the International Brotherhood of Electrical Workers. The strike lasts almost 6 months.

1972
Digital Data Service (DDS) is started up by the Bell System offering synchronous digital data communications services from 2400 bits per second (bps) to 56000 (56K) bps. DDS is the single greatest advance in the history of data communications by pioneering the transmission of totally high speed digital signals.

1968-1978
Much development goes into new concepts and new forms of data station equipment. “Machines that make data move” becomes Teletypes trade slogan. Devices such as the Dataspeed paper tape senders and receivers operating at 750 – 2000 words per minute. The Inktronic printer that sprayed 80 characters at a time on a roll of paper at 2400 words a minute. R & D is working overtime on new projects for the Bell System and the government. TWX is sold to Western Union.

1978-1979
Second generation Dataphones now offered by the Bell System at speeds up to 19200 bps. Increased competition takes away sales.

1979-1984
The Teletype Corporation produced the newer “Black line” of Model 40, 4540 electronic display terminals and chain type based printers. The Models 42 and 43 dot matrix terminals are introduced. They also produced the Magnetic Tape Terminal as an adjunct for both the Models 43, and 40 lines of equipment.

1984-1989
Divestiture of the Bell System. Teletype name is dropped along with its logo to be replaced by AT&T and the “Death Star” logo. Operations in Skokie are discontinued and operations consolidate in Little Rock, Arkansas. Many employees are laid off. Then the operation in Little Rock manufacturing the 5310 terminals and printers is closed down and moved to Singapore, China.

1984-1996
It was during this period that Don House founded and began what is now incorporated as the North American Data Communications Museum (NADCOMM) a California Not-For-Profit, Public Benefit Corporation. The museum collective now has 5 locations across the country. The museum is operated and administered solely by volunteers, mostly veterans of the data communication revolution.

2001
All that is left of the Bell System and Teletype Corporation is what is in the history books and in our memories. Approximately 12,000 Teletype machines world wide still exist in the hands of third world countries, amateur radio operators and collectors.

This entry was posted in Papers and Writings and tagged baudot, hughes, kleinschmidt, morkrum, morse-vail, timelinke. Bookmark the permalink.